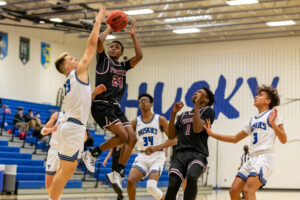 This month we want to highlight senior, Nick Burnell, currently a senior at Rock Ridge High School. His extracurricular activities include being Captain of the varsity high school basketball, Strategy Officer and member of the Engineering Team of Academies of Loudoun RoboLoCo 5338 First Robotics Competition team, member Varsity Club, and member of The National Honor Society. After high school, Nick plans to get an undergraduate degree in Mechanical Engineering with a focus in sustainable energy and automobiles.

Nick’s favorite basketball moment is almost having a triple double putting up 17 points, 9 assists, and 8 rebounds also having 2 blocks, and 3 steals in a single game. He began playing basketball at the age of 6 and over the years he has played for various schools and AAU teams. For the last three years, Nick has been a member of Hoops, where he has had an opportunity to train, play, and assist with coaching basketball. He truly loves the game.

Nick considers himself a well-rounded player and a competitive defender. Not only does he work hard on the court, but he also works hard in his academic classes and in his community, where he is involved in several organizations. Nick’s motto is “dedication and hard work are indispensable to success,” and it shows — both on and off the court.