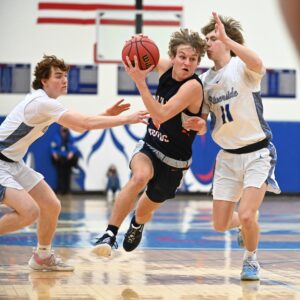 Zach started with Hoops the Right Way in the spring of 2018 (just 5 months before Briar Woods High School tryouts as a freshman) and trained under Coaches Ken and Mike for 4 years.

Zach’s experience with Hoops has been extremely positive in every aspect of his life. Zach tried out for the 8th grade Eagle Ridge Middle School team and did not earn a spot on the team. But, after training hard with Hoops for 5 months, he made the Briar Woods freshman team, and in subsequent years he played on their JV and Varsity teams. Zach was always a starter or 6th man, and he was arguably considered the most athletic player on the various teams he played on. His basketball IQ is very high which resulted in many fast breaks and steals over his career. The plyometrics training he received from Hoops directly resulted in him being able to dunk at just 6 ft tall. He was a big contributor to the very successful Hoops teams he played on, teams that usually won a medal for podium placements in the AAU tournaments they played in. Zach loves the game of basketball. This only happened because he loved the training he engaged in with Hoops for 4 years. Zach’s athleticism and physical health has become a way of life for him, and he is more disciplined and strong willed because of his training with Hoops. He always strives to “do the right thing”, he’s compassionate and empathetic towards others, and he makes great life choices. Not only has Hoops made Zach a great athlete and basketball player, they have also helped shape him into a good person.

While Zach has decided to focus on academics of a Sports Science major and not seek a collegiate basketball experience, he plans to play club basketball at ECU and is going to keep his options open to playing for ECU.

We are proud of you, Zach!